The first railroad to come to Oregon was the Ogle & Carroll County Railroad that was chartered in 1857, and eventually ran from Rochelle to Oregon. It arrived April 1, 1871, at the base of Oregon’s Washington Street Bridge, where the Oregon Country Club is now located. The railroad had a long and difficult history with regard to financing and management. It was a time when every town wanted a railroad to transport farm products and be able to participate in the wealth of commerce, and in order to get the railroad to travel through their towns, financiers subscribed funding from the various towns and then the money would disappear. There were promises of supplies from competing railroads and then the supplies never materialized. In spite of these times, and after much difficulty, Francis Hinckley eventually got his railroad to the Rock River.

Almost immediately, George Hill offered the railroad land if they would cross the Rock River one mile south of their then existing location; he hoped that the center of Oregon would move to his location and he could profit from additional land sales. The railroad accepted the offer, and on October 20, 1871, the first train crossed the wooden covered bridge that had been constructed. The bridge was utilized until 1903, when the existing bridge replaced it.

The first passenger train came to Oregon on April 18, 1871, and passenger service from Oregon to Mt. Morris began on November 12, 1871. By 1872, James Frederick Joy had extended what was then the Burlington & Michigan Central from Aurora to Forreston, and Francis Hinckley by 1874, had extended the Chicago, Rockford & Northern 24 miles from Flagg Center to Rockford; the system became part of the Chicago & Iowa Railroad.

To this day the Aurora to Savanna branch of the Burlington Northern Santa Fe is known as the C&I.; The original C&I; was along the stagecoach line that ran from Chicago to Galena, and the original stagecoach station was the building at the corner of Washington and Third Street. Locals will remember the watering hole known as the C&I; tap which still exists as well. For those who can remember the old Sinnissippi Hotel, the cupola on top of the building was useful to lookouts watching for approaching stagecoaches.

In 1885, the Chicago, Burlington & Northern was chartered and constructed from Oregon to St. Paul, Minnesota, and began operations in November of 1886. This passenger line was touted as “Where Nature Smiles Three Hundred Miles.” Four years later, the larger Chicago, Burlington & Quincy purchased the stock of the CB&N;, and together with the Chicago & Iowa, they promoted the City of Oregon as a resort town with qualities comparable to those of nationally-known travel destinations in Colorado, Wisconsin, and Minnesota. In 1892, the Chicago & Iowa was incorporated into the CB&Q; system. 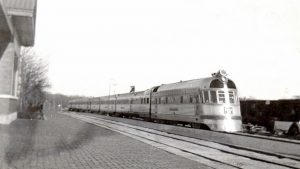 Throughout the early and mid 1900’s, Oregon saw an abundance of passenger traffic, and was itself a popular destination among travelers. Two regular Chicago-based trains of the CB&Q; passed through daily. Three ticket agents were available 24 hours a day to accommodate passengers boarding the morning eastbound, or the late night westbound. In the mid-1930’s, the Burlington introduced the streamlined transcontinental Zephyrs, which were the express trains of their day. The trip from Oregon to Chicago took only one hour twenty-six minutes! These trains, in addition to the regular traffic, kept Oregon a busy little city. On occasion, special excursion trains also came to Oregon; in 1939, the “Jack Frost” cycle train brought riders with their bicycles from Chicago, to be fed by the Blackhawk Grange before cycling the twenty miles north to Davis Junction where they boarded a different train for their return to Chicago.

In 1970, the merger of the CB&Q;, the Great Northern, the Northern Pacific, and the Spokane, Portland & Seattle, to form the new Burlington Northern, was approved by the ICC. In October of that same year, President Nixon signed an act creating the National Railroad Passenger Corporation that in May 1971, opened the nationwide passenger service known as Amtrak. Sadly, Amtrak’s timetable did not include Oregon, Illinois. The era of passenger trains through Oregon was history.